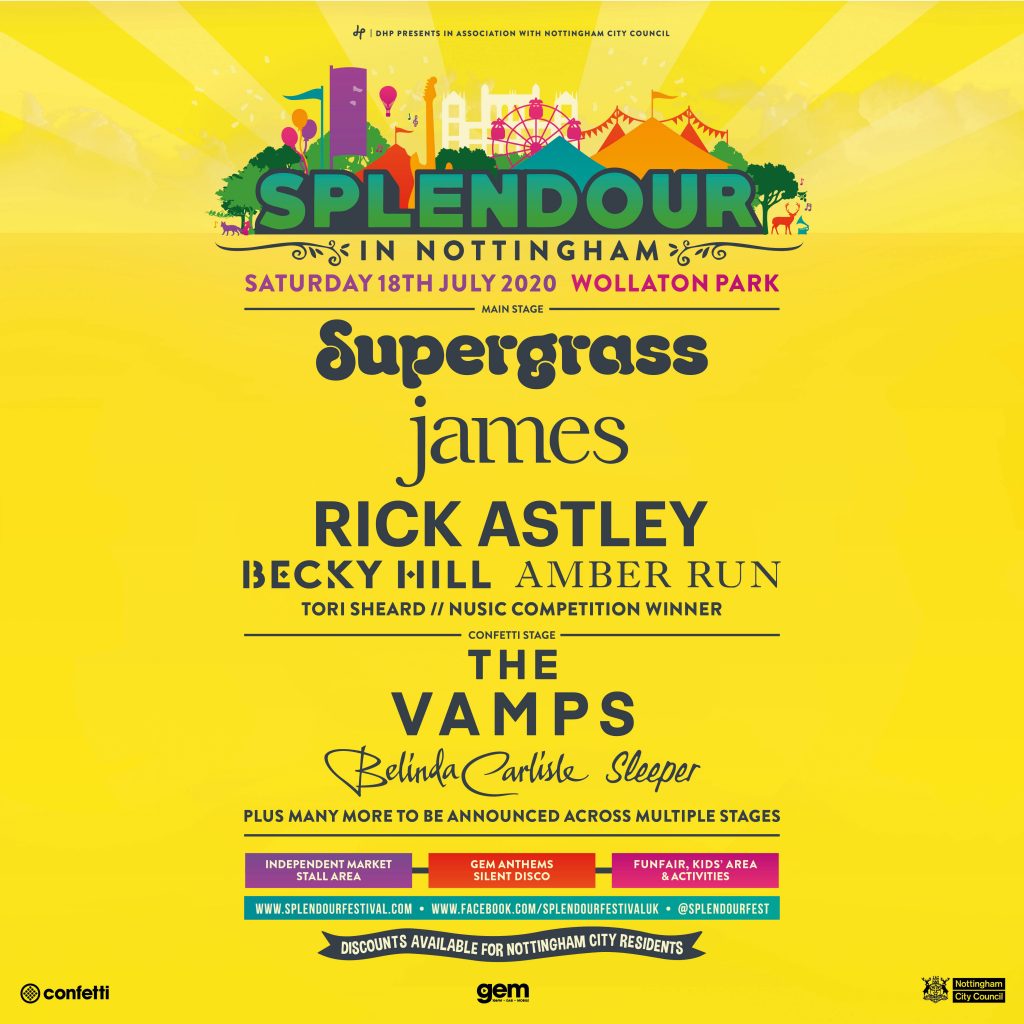 The line up for Splendour is taking shape, with an exciting list of new artists announced today (18 March 2020) to join the already confirmed Supergrass, James and Belinda Carlisle.

Headlining the Confetti stage will be one of the most successful pop bands to come out of the UK in recent years. The Vamps have achieved a huge amount of success and obtained devotees all over the globe. Having become the first band ever to headline the O2 Arena five years in a row, the four-piece certainly know how to get a crowd excited. The boys will no doubt be performing much loved hit singles ‘Can We Dance’, ‘Wild Heart’ and ‘Last Night’ amongst their newer material.

Everyone’s favourite 80s troubadour Rick Astley will be taking to the main stage for the early evening slot. At the age of 21, Rick became one of the biggest stars on the planet. His era-defining classic ‘Never Gonna Give You Up’ topped charts the world over and catapulted him on a journey that would encompass eight consecutive UK Top 10 hits and 40 million sales. After stepping aside to focus on his family, he shot back to number one almost 30 years later with his hit Platinum-selling album ‘50’.

The classic crooner will be stopping off at Wollaton Park on Saturday 18 July as part of a worldwide tour of his latest album of greatest hits ‘Best of Me’.

Joining Supergrass, James and Rick Astley on the main stage will be Becky Hill, who is currently supporting The Script on their UK tour. After an incredible 2019, Becky has been listed as the second most listened to British female artist on Spotify in the UK, having notched up over a billion streams and more than 19 million monthly listeners.

Hill, who first shot to fame when she appeared on The Voice back in 2012, released her first full-length project last year in the form of compilation album ‘Get To Know’. The album brought together a string of Hill’s collaborations, including UK number one single ‘Gecko (Overdrive)’, on which she joined forces with Oliver Heldens. Catch her at Splendour before she embarks on a solo tour having announced UK dates later this year.

After hibernating for more than 20 years, Britpop favourites Sleeper are back on the road, performing live. Original members Louise Wener, Jon Stewart and Andy Maclure are joined by Kieron Pepper, previously of The Prodigy. Sleeper enjoyed huge critical and commercial success in the mid 90s achieving 8 Top 40 singles across 3 Top 10 albums with well over 1million sales. The band also had two songs featured on the era defining ‘Trainspotting’ soundtrack and are held in huge affection by legions of fans delighted to see them return in top form.

Expect a soul-searching set of beautiful songs from Amber Run, the indie rock-pop band formed in Nottingham, as they perform tracks from their new album ‘Philophobia’. Known for winning over audiences with their natural skill and stage presence, this is a band made for a festival field as they deliver cinematic pop with a moody and introspective tone.

Young and upcoming folk-pop singer-songwriter Tori Sheard brilliantly combines poetic lyrics with earwig melodies to capture human emotion and is quickly making her mark on the UK music scene. After selling out two headline shows at Bodega and Rough Trade before turning 20, she’s definitely one to watch.

Opening the main stage will be the winner of the Future Sound of Nottingham, the annual search to find the best new unsigned talent in Nottinghamshire. With the search already underway, artists are now battling it out to reach the final at Rock City in early July.

Already announced are Supergrass, who are making their Splendour debut following a string of glowing reviews for their ‘joyous return’ (Guardian), alongside Mancunian legends James. Global pop icon Belinda Carlisle will be performing on the Confetti stage, with all three bringing impeccable back catalogues to Nottinghamshire’s biggest summer party.