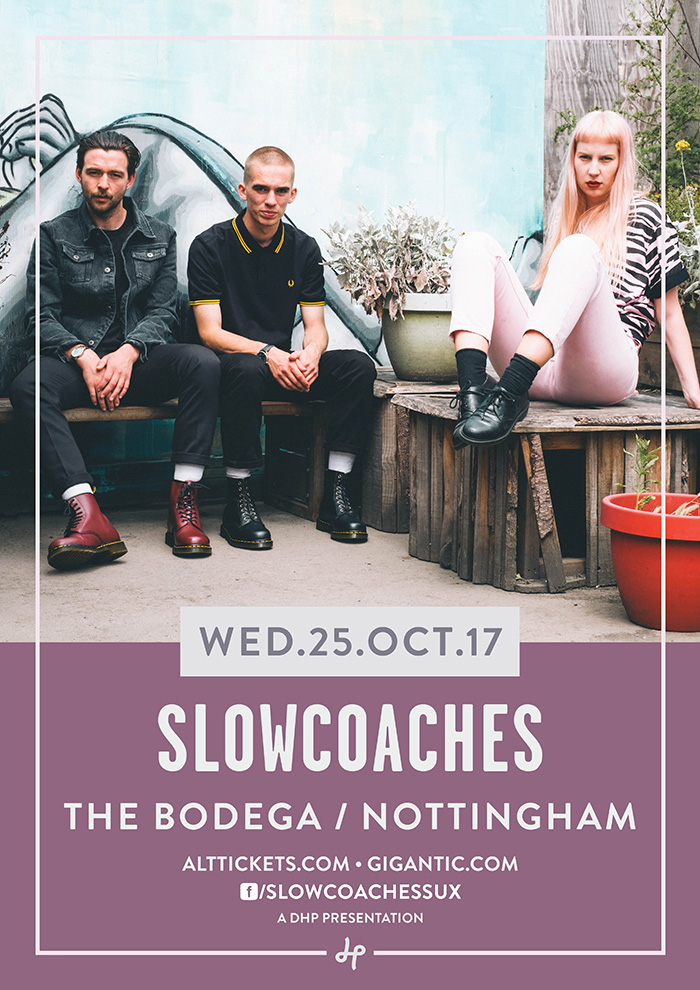 London-based punk-fuelled trio Slowcoaches have announced their biggest headline tour to date for October and November this year. See below for details.

Vocalist / Bassist Heather Perkins says of the shows: “This is the biggest headline tour we’ve done so far, so we’re excited to play some of our favourite venues and visit some new cities. It’ll be the first outing for a lot of new material too. We look forward to hanging out and making a lot of mess. Please note that all of our shows are safe spaces. This doesn’t mean don’t mosh. It means don’t be a dick.”

Slowcoaches are also set to support The Coathangers in London this week and will be playing the Be Nothing x Teen Creeps unofficial party over The Great Escape in Brighton this weekend. Further summer shows include Tramlines and End of The Road Festivals.

The band’s riotous live show has been known to cause grown men to headbang so vigourously they end up headbutting the monitors before projectile vomiting all over the stage. Expect the unexpected but know you’ll be in for a wild ride. Think the grubby grunge of Mudhoney and early punk of The Germs meeting 1970s LA icons The Nerves and the sassy stance of Babes In Toyland down a dark alley somewhere in east London and you’re halfway there.

Slowcoaches’ debut album ‘Nothing Gives’ was released at the tail end of last year via Leisure & District and, though it could easily soundtrack a fun time, the themes of the record detail all the bad stuff that happens in life: break-ups, breakdowns, a pre-mid life crisis, a drug induced mental illness, falling out with friends, getting way too wrecked, losing your job then desperately trying to find a job… the list goes on.

“A freewheeling blast through millennial anxiety and frustration.” – Q Magazine

“In terms of emotional response they’re the perfect fusion between The Stooges and Ceremony – dejected and frustrated but often landing sunny side up.” – Noisey

“a haze of catchy melodies and punk sneering” – Kerrang!