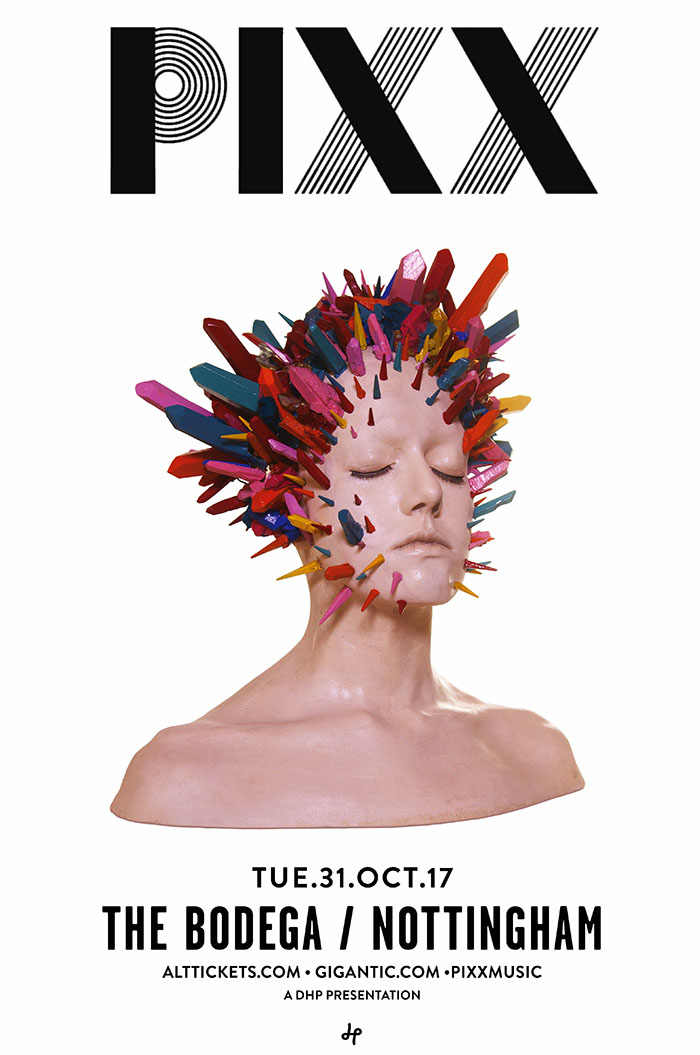 A playful, performative record, The Age Of Anxiety borrows its title from a phrase found in a notebook given to Pixx (the moniker of 21 year-old musician Hannah Rodgers) by her brother, Luke. It is the title of W.H. Auden’s final long poem, charting one man’s quest to find substance and identity in a shifting and increasingly industrialised world. Published in 1947, it seems fitting that Auden’s rumination on human isolation in the modern age should be used as the title for Pixx’s debut album – ostensibly placing herself outside looking in, The Age Of The Anxiety looks instead to address a generation increasingly isolated by an unprecedented new world, from the pressures of social media to ever-changing political turbulence.

Originally from Chipstead, just beyond the fringes of south London where suburban sprawl starts to break into countryside, Hannah’s is a family of music lovers and her early life was soundtracked by her father’s expansive record collection; she has previously cited acts as diverse as Joni Mitchell, Kate Bush and Altered Images. Encouraged to sing and write, these formative years led to her creative talents being recognised by the prestigious BRIT School. Aged 16, and already with a number of her own songs sketched out, Rodgers enrolled at the renowned performing arts college, previously attended by the likes of Adele, Amy Winehouse and King Krule. It was only after graduating that she begin to think of doing anything with her own music, resisting the more mainstream route traditionally taken by her peers. Adopting her grandmother’s nickname, Pixx was born.

Signed to venerable indie label 4AD at just 19, Pixx released her first collection of music, Fall In, in 2015. An EP of four folk-infused torch songs, it is, by Rodgers’ own admission, a deeply personal collection writ of heartbreak and introspection. Fall In went down a storm amongst critics, with The Sunday Times calling it “one of the most arresting debuts of the year.” The critical attention helped her secure crucial slots at Glastonbury and Latitude festivals, whilst she was also invited to perform with the likes of Daughter, Lush and Glass Animals amongst others.

Hannah remembers her first awareness of anxiety; aged 9, confused by an insomnia caused by recurring nightmares. The perpetual cycle from sleep deprivation to lucid dreams lasted just a year, but left a lasting impression, inspiring a fascination with the self and how it can be discovered in different states of consciousness, especially for a vivid dreamer. This is one of many somnolent experiences that she draws upon for her anticipated debut album, The Age Of Anxiety, released later this year on 4AD.

With the outside world in turmoil, Rodgers looked internally for inspiration. Those childhood nightmares, and later visceral dreams, provided the perfect metaphors to unpick the current topics of the moment, to seize some sort of control when all around seems to lost. Instead of tales of loss, Rodgers found herself writing from the perspective of a social commentator, exploring the sense of unease ignited initially by her nightmares and later her waking reality. The spiralling ‘Waterslides’ recounts a nightmare of being trapped in a waterpark surrounded by faceless figures dressed in business suits, whilst ‘A Big Cloud To Float Upon’ details one of the first formative memories Hannah is able to clearly recall.

A compulsive writer, ‘Everything Is Weird In America’ is a line Hannah scribbled in a notebook during her first visit to New York. Although intended to be tongue-in-cheek, it is prescient in the way it depicts the Free World’s current state of uncertainty, increasingly poignant given the ongoing climate. In contrast, ‘Grip’ is about going through life looking backwards, but interminably moving forwards into the unknown, echoing a generation lost in time.

An ambitious debut statement, The Age Of Anxiety represents the first true statement from a unique British talent, drawing on deeply personal experiences to present a bold, relatable new commentary on her world order.