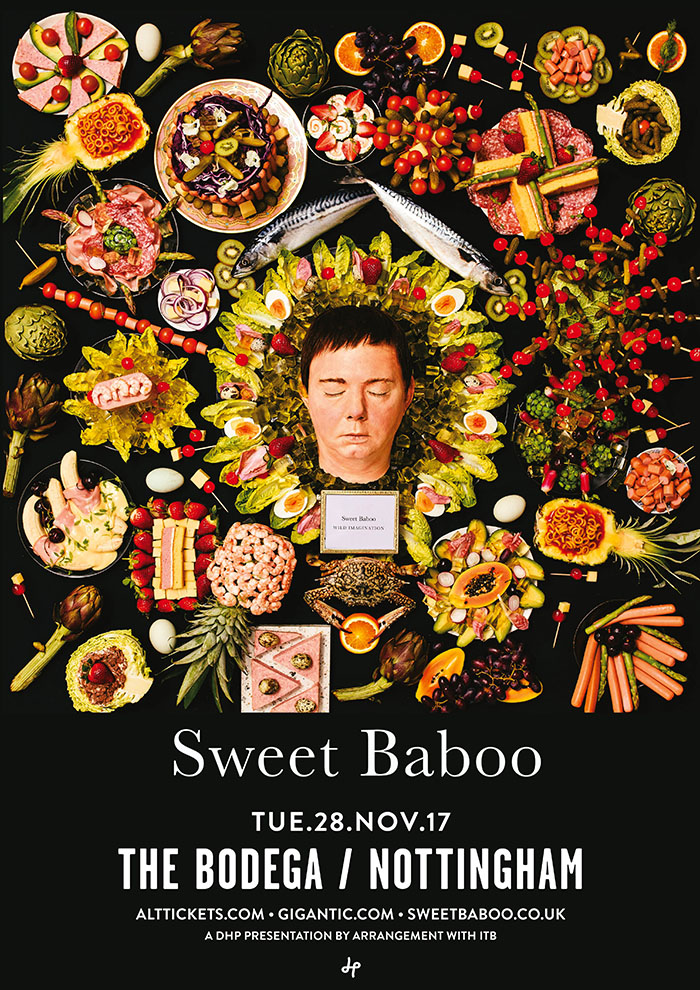 Sweet Baboo is Stephen Black, a native of the north Wales countryside and a single-minded, idiosyncratic singer. Black possesses an ear for a sparkling melody, a restless soul, and a gift for a deft lyrical turn – from darkly funny to piercingly tender, twinklingly boastful to deliciously self-deprecating.

Sweet Baboo’s third album, I’m a Dancer/Songs About Sleeping, was nominated for the inaugural Welsh Music Prize in 2011, a year which also saw the release of his EP, Girl Under A Tree. Influenced by fond musical favourites, The Beach Boys, Daniel Johnston and Gorky’s Zygotic Mynci, Girl Under A Tree tells tales of girls, loss, adventure and drinking.

Over the last few years, Sweet Baboo has played at Latitude, Green Man Festival, SXSW and The Camden Crawl, as well as touring Germany with Johnny Flynn and the UK with Islet and Slow Club. He has also been invited to record sessions for BBC 6 Music’s Marc Riley, Huw Stephens and Stuart Maconie. Notably, Black’s song How I’d Live My Life (AKA The Bumblebee Song) is the soundtrack to a series of TV spots for the Visit Wales tourist board campaign.

Black’s productivity is all the more remarkable given his extra-curricular activities which have seen him working with an ever-growing array of musicians. Black has played on albums by Cate Le Bon, Slow Club and H. Hawkline, and has been a regular part of the touring line-up for all three bands. He has also performed with and produced Euros Childs, The Pictish Trail, The Voluntary Butler Scheme, Islet and Spencer McGarry Season and collaborated onstage and in the studio with Gruff Rhys. 2012 saw Sweet Baboo set off on a world tour as part of Slow Club’s live band as well as a North American and UK tour in Cate Le Bon’s touring band.

In between world tours, Black found time to record his fourth full-length album, a concept album about the sea which is tentatively titled Ships, with long time collaborator The Voluntary Butler Scheme. The latest instalment in the Sweet Baboo saga sees Black indulge in his love of super brass-heavy pop and is due for release in 2013.

From his facebook page…
“Started out being forced to sing in a school show featuring songs from Joseph at the age of 11, enjoying it so carried on. Started singing lesson at 12 and playing the ukulele at 14, and developed from there with other instruments and songwriting. I have a passion from music!!!

I have been asked to support some incredible artists which include Ryan Keen, Lewis Mokler and Keston Cobblers’ Club. Mainly rooted in indie folk, I just write music I would want to hear. 🙂

Inspired to start gigging by listening to many amazing contemporary artists. The likes of Ben Howard, To Kill A King and Dry The River. Realised there was loads out there in my local scene and discovered many amazing local artists like Marc Reeves, Georgie Rose, Frankie Rudolf, Leah Sinead, Kane Ashmore and so many more!!”