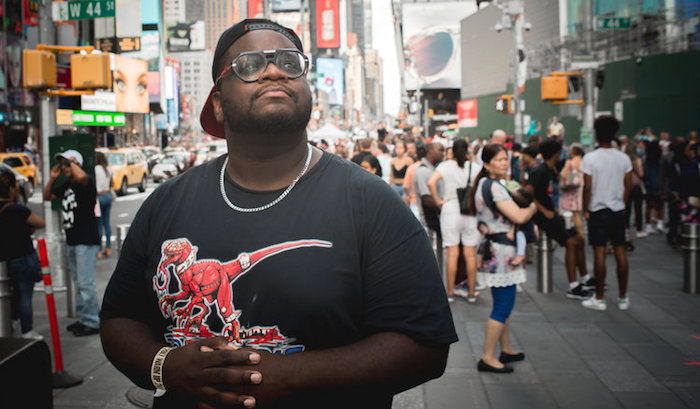 When LA Weekly said that Ran’s “fanbase and niche audiences are growing at a rate not seen since Tech N9ne,” they meant it. A former middle school teacher, Mega Ran (formerly Random) blends education, hip-hop and gaming in amazing new ways, penetrating the farthest reaches of the galaxy with his unique rhyme style and electric performances.

Ran cut his teeth in the city of Philadelphia as a moonlighting emcee and producer, performing, freestyle rapping, producing and later engineering at a studio. After relocating to Phoenix, competing in the Scribble Jam emcee battle championships and taking an early exit, Ran almost quit before he was even started, when a creative lightning bolt struck, and a fire was lit. Mega Ran Philadelphia by James Johnson.

Various video game developer co-signs and admiration from the genre’s toughest critics have led to placements in TV, movies, university coursework, and of course, games. Ran’s music and story have been shared on stages across the world, on television (ABC/NBC News, ESPN, Portlandia, Tosh.O, WWE Wrestling) and in leading music, gaming and tech publications, print and online.

Today, Mega Ran is no longer a teacher by title, but maintains a rigorous touring and recording schedule, traveling the world to entertain and educate through the gift of rhyme. With four Billboard charting albums, 3 million YouTube views and a legion of smart art fans he calls “Team Mega” beside him, the future looks brighter than ever.