Celebrating 2 decades of music, we welcome the insanely talented Dizraeli to Notts this month. Before then though, we chat to the man himself about the shows and how the whole tour will be a positive impact both socially and ecologically. Read the fascinating interview in full below. 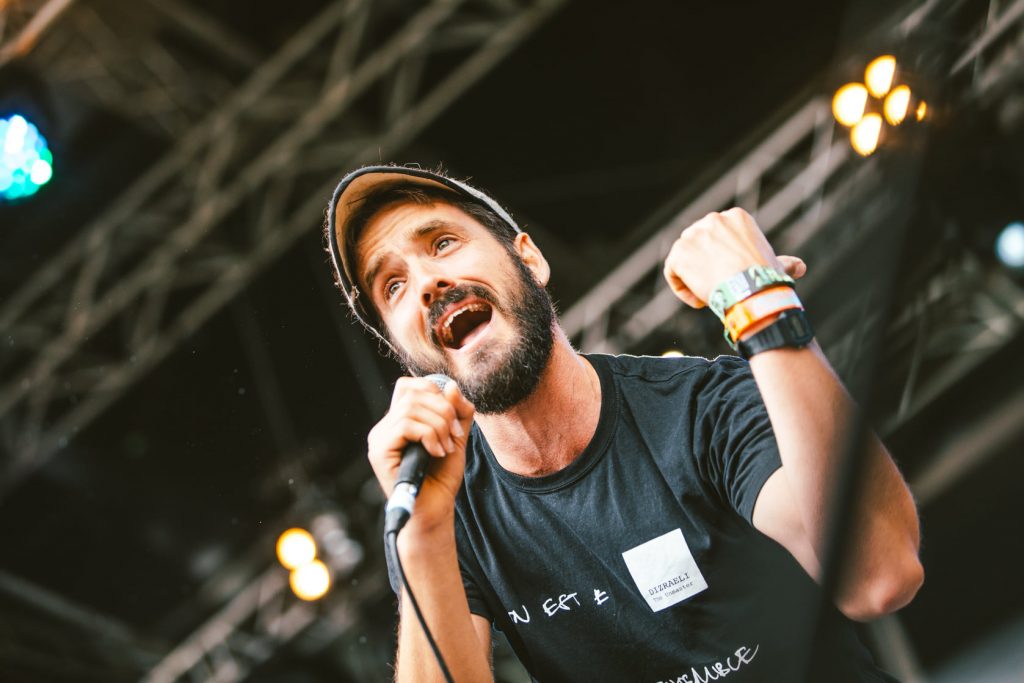 Hi Dizraeli! The upcoming tour marks 20 years of making music, what can we expect from the celebration?

Ahhh it’s the most outrageous lineup of players, a whole new band I’ve gathered especially for this tour with violin, cello, keys, vibraphone and of course a massive rhythm section… and Cate Ferris, who people will know from Dizraeli and the Small Gods days. Cate has been a collaborator since 2008, we were neighbours in Brighton and she’s such a stunning singer and all-round artist.

The idea with this line-up is that we’ll be able to play the full range of music from the last 20 years, from the more folk-influenced, sweet songs to the most slamming dancefloor fillers, and make all of those different feelings make sense all together. We’ll be playing 2 sets and 2 hours, and it’ll be a journey from floating on gusts of lushness to fullpower fired up stomping in the dark.

There’ll also be other gorgeousness going on around the sides – I’m inviting a massage person to every show so people can get their bodies kneaded while they get their minds realigned by the music. And on 3 of the shows we’ll be collaborating with local community choirs…

That’s a lot to pull together, how have early rehearsals been going so far?

I’ve been working with the various players separately, and I’m on my way right now to London for our first rehearsal with the whole entire line-up. The collabs with the choirs are coming together at the moment. I had a couple of days working with Cate Ferris on the voice arrangements and they’re sounding ultra.

Recently, you launched a crowdfunder campaign to shift the way in which you tour, both ecologically and in connecting with communities. Please could you tell us a little more about that?

Yeah absolutely. Here’s the link to the campaign, where there’s a video that breaks it all down : https://www.indiegogo.com/projects/dizraeli-the-twenty-years-deep-tour/x/18796175#/

For the last few years I have been following the progress of the climate emergency we are living in and our repsonses to it; I was involved with the early days of Extinction Rebellion and then was at COP 26 learning as much as I could about climate justice issues. There has just been another report from the IPCC (Intergovernmental Panel on Climate Change) and there is no more time for pissing around – we have to act IMMEDIATELY and in as far-reaching ways as we can muster, in order to avert the worst effects of climate breakdown. Let’s be clear – the climate is already breaking down; there are already millions of people being displaced by fire, drought, famine caused by manmade climate change (Angola and Southern Madagascar are two terrible examples of this). We can see very clearly what climate chaos looks like and what it means on a human level. It means people suffering, children dying or being traumatised by horrific life events, families being devastated. I have two twin boys now and when I see a Madagascan mother holding her dying child on the news, I imagine that being my baby, my son.

And yet we are not doing anywhere near enough, individually but especially on a governmental level in the Western, ‘developed’ countries, which is where the fastest and most impactful changes could happen. It’s as if we can’t grasp what climate change actually means, or believe that things so awful could really unfold, that the disaster films could really spill out of the cinemas into reality, even when we’ve seen the footage of Australia burning, Canada burning. We are not protected by our wealth or technologies; we are silly little soft organisms that rely for survival on a fragile balance in a fragile ecosystem – a balance which we are in the process of destroying.

On a moral level, we have to act now, and that includes me. I want to use this tour and crowdfunding campaign as an opportunity to use my platform to talk more about climate change and what it really means, to be a part of the cultural conversation moving on from this weird stagnation and denial, to somewhere that is pragmatic and empowered to act. Part of that for me is about changing my own practices so that they make more sense in the world of 2022. So for this tour my 10-person crew will be travelling as low-carbon as possible (on trains and in 1 electric car); funding the planting of new trees in every city we visit, via local organisations; eating as locally and sustainably as we can over the duration of the tour; distributing wildflower seed and planting instructions to all audience members to bring a little explosion of biodiversity to everywhere we go… These are small gestures but the hope is that they will inspire other artists to think about their impact too, and provide some kind of a blueprint for other future tours (my own and other people’s).

I also want the tour to have a positive impact on the communities we visit, knowing how much of a struggle it is for talented young people from disadvantaged backgrounds to get a break in the arts, especially since the introduction of insanely high tuition fees for further education; cuts to youth services; the pandemic bringing out such stark differences between people’s access to resources of space, culture, food, everything… so we’re offering 10 free tickets for each show, via local organisations and charities working with young people in the arts, as well as paid performance opportunities to a select few young artists per city. We’ll also be collaborating with community choirs in 3 of the 6 cities we play in.

If we hit our goal on the crowdfunder we’ll have the resources to make this tour as much a force for change as we can, on an ecological and social level. We’re about halfway there so far and I feel sure we can get there before we hit the road. 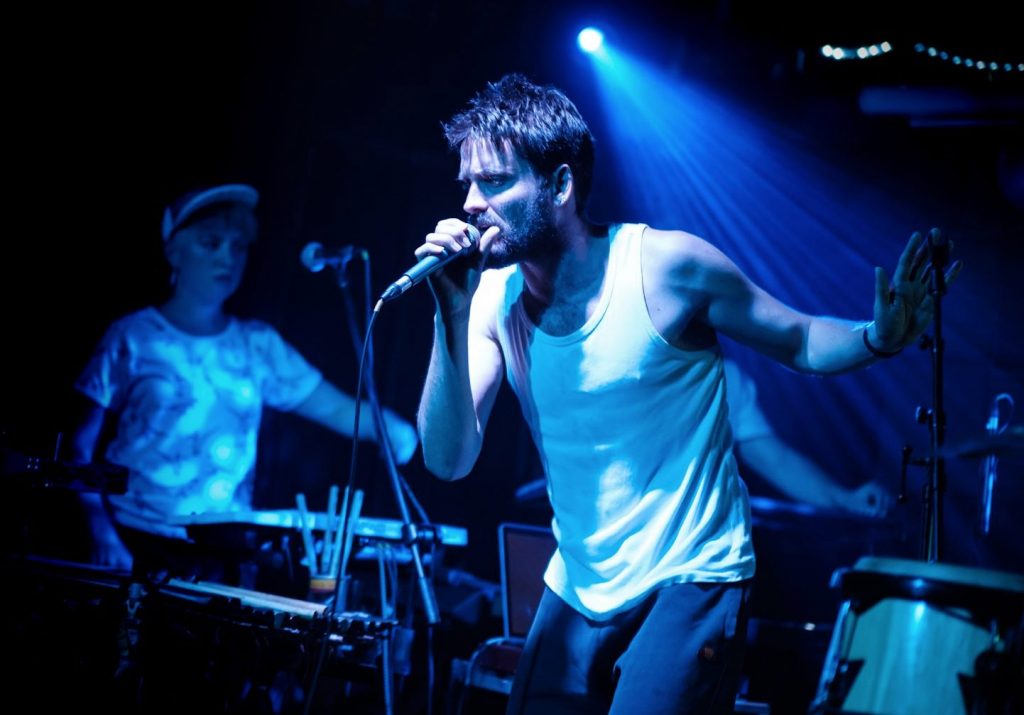 Aside from donating to the crowdfunder of course, how can venues, gig-goers and other touring artists make a better impact ecologically when it comes to gigs?

Oh my goodness where to start. It’s hard isn’t it, we’re in a system that is fundamentally wasteful, polluting, all of it, and it’s on those who define the parameters of that system, more than on us as individual components, to make the big changes.

You were last in Notts playing at the lovely Arb last Summer with Beans on Toast. Have you got any memories of the city from the last couple of decades?

Just a lovely welcome every time. I haven’t played Notts as much as I’d like but I have warm feelings about the people here.

Any finally, any wild rider requests we should be prepping the venue for? (the wilder the better!)

Well we’ll be aiming to provide a meal at the venue for as many people as we can afford (band, staff, support acts) with local caterers providing the food and drink from only local, sustainable suppliers… I want to get as many people as I can round a table together, get some social closeness and connections made between the humans before we play the music… Don’t know if that counts as wild but that will give me a lot of joy.

Looking forward to welcoming you back to Notts in a few weeks… see you then!

Dizraeli will be in Notts on 28th April with special guests Concrete Rose. Info and tickets are available here. 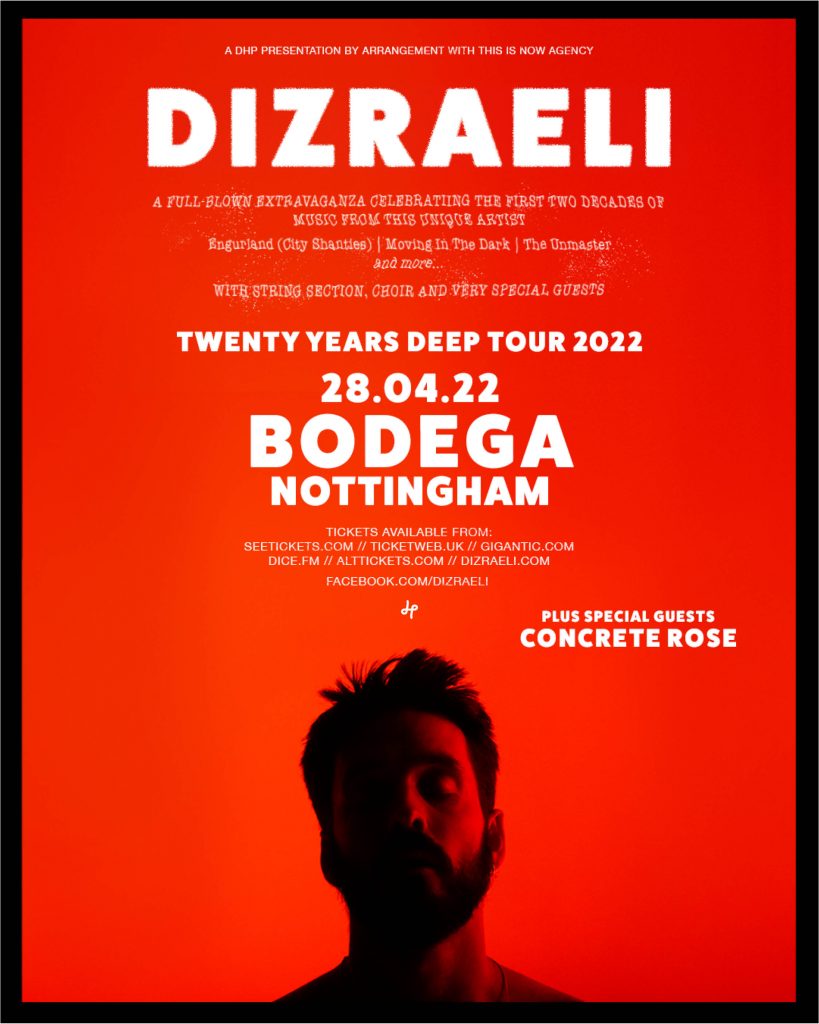