Following tours with Blossoms and Inhaler, alongside sold-out headline shows of their own, Stockport’s Fuzzy Sun​ are taking their blend of contemporary pop, California R’n’B nostalgia, and just a hint of disco flare on the road later this year. We caught up with the boys from their isolation station to chat about their new single, live shows and what they’re doing to pass the time. Dive in below!

Hey Fuzzy Sun! How excited are you to finally get on the road later this year?

Yeah it’s gonna be great! I’m hoping with all this going on at the moment, that once we are all able to be together again in a packed out venue that we can all let loose and enjoy ourselves. Fingers crossed this will make the atmosphere even more electric!

Warm Nights is your brand new single, how was the process of writing and recording that song?

It certainly is! Warm Nights is a song we have had as a band for a while but it’s always been a tune we have been fond of. As it was a while ago, I feel like the writing and recording were very different processes which is cool. In terms of writing, the tune originated from the lyrics in the chorus line. I had the idea for the content before the song existed. So I came up with the melody whilst cooking some food, and recorded it as a voice note in my phone and later on, I worked out the chords and a basic structure on guitar. Then took it to the lads and we fleshed it out, adding in some different elements (such as Raffi’s solo.) So yeah, the writing was a little different on this tune as I’d normally start out with the music.

In terms of recording, the song took a bit of a different direction, originally it had quite a sparkly tight poppy feel to it, but in the studio we decided to take it down a different route by giving it a bit more dirt and growl. We recorded the vocals on an Sm58 microphone with a distorted guitar amp and added a lot of fuzz on the bass. We also went in quite heavy on the vocals by adding in lots of layers and harmonies or certain parts which didn’t exist originally. So the recording process was fun and experimental and gave the song a new lease of life.

It’s really cool to have a deep dive into that process. Your sound cleverly blends indie influences with a disco flair, how does the creation process of a song usually evolve between the 5 of you? Is it a fairly collaborative process?

It’s normally on a song by song basis, we just allow the songs organically take their form, with me pushing them in a general direction. Sometimes the songs will be written in the room with all of us or a few of us, sometimes it might just be two. But they all get everybody’s flair on them, so on the whole it is a very collaborative process, which helps as it allows the music to have life, and not be one dimensional. When other peoples influences come into the song it just opens them up, which for myself is important.

You’re the latest band flying the flag for Stockport right now. How is the scene where you’re from?

Stockport is a strange one for it’s music scene. When I was starting out at like 13/14, there were lots of places to play (like The Thatched House, Bulls Head, Bakers Vaults, Roughleys Bike Show.) These were granted not ‘music venues’ but there was definitely a scene going on and there was live music happening every weekend. The thing is we are very close to Manchester, so people won’t necessarily travel from Manchester to Stockport for gigs, yet people will go from Stockport to Manchester. So its tough. I’d definitely say there is great music and bands coming out of Stockport but there isn’t really a music scene anymore unfortunately. 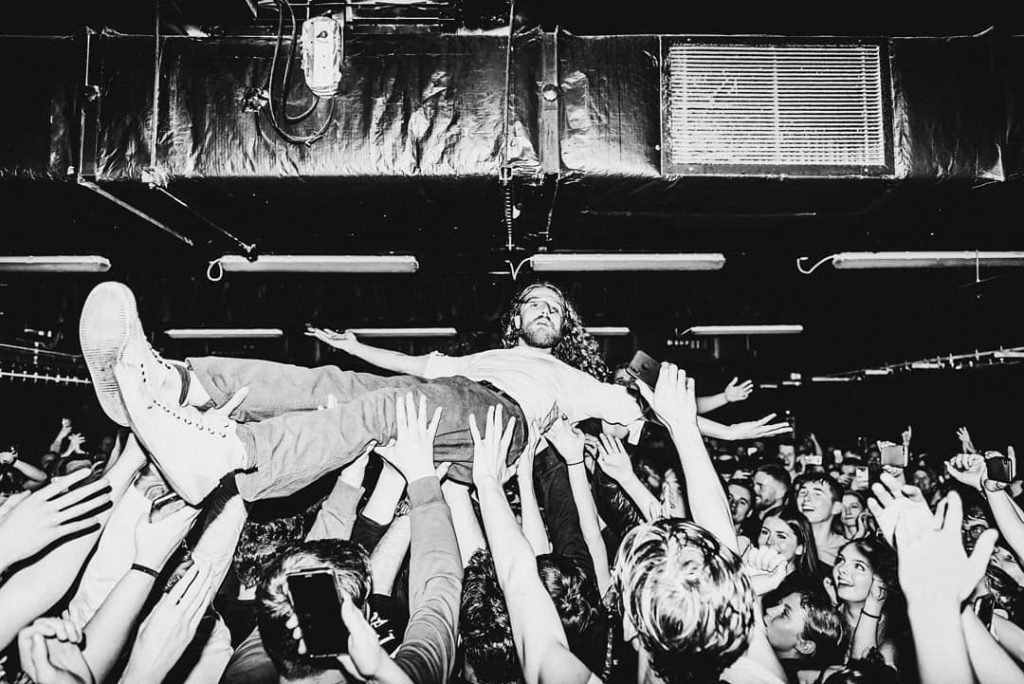 Over the last couple of years, you’ve spent time on the road supporting the likes of Blossoms and Inhaler. How does your approach change when your preparing for a headline tour, instead of a support tour?

It doesn’t really, we always go out there to put on the best show we possibly can whether that be supporting or headlining. We always prepare a set with intros and interludes, so that it flows nicely and you never really have to stop the momentum of the gig. The only difference I suppose is we prepare more songs for a headline show, which in turn requires more interludes and writing interesting stuff. But really we aim to do the same thing on any show we do and that is to entertain and have fun. Also with headline stuff we would like to start adding in lighting shows and maybe some pyro, but we will have to wait and see…

And finally, what have you all been up to, to help pass the time recently? We need some ideas!

We have been working on some covers to put out there for people, trying to sort out some collabs with other bands that we can post online. Obviously we have been getting ready for these releases this month, editing and shooting music videos and stuff like that. We are also still writing new songs and working something special we hope to put out over the next few months. That and watching films (if you need film recommendations we have shit loads), sitting in the sun (when it decides to come out). Trying to stay as busy as possible, as I hate not being busy, over Christmas I was stressing when we hadn’t done anything band related for 10 days haha.

Oh, and this interview, so thanks very much asking us to do this and we can’t wait to get down to Nottingham! Big Love guys and stay safe 🌞💕

Fuzzy Sun will head to The Bodega later in the year. Tickets are on sale now here.

Listen to Fuzzy Sun on Spotify