Having previously supported the likes of Blossoms and Two Door Cinema Club, we (virutally) met with Stockport’s newest synth-driven indie trio Fuzzy Sun ahead of their upcoming Bodega show. Let’s meet the lads…

We’re buzzing to welcome Fuzzy Sun to the stage here at The Bodega, how are you guys feeling ahead of hitting the road?

Thanks for having us back! Feeling great. What better way to say goodbye to the winter and bring in the start of spring than getting back on the road to share our new music with everyone.

You’ve had a lot of love for your new tunes, how does it feel getting praised by the likes of Jack Saunders on BBC Radio 1?

It’s always really lovely to get any praise on the tunes as that’s what we hope for when we put the new music out haha. But yeah, to get Jack backing the first single was great, so big love to him for that. 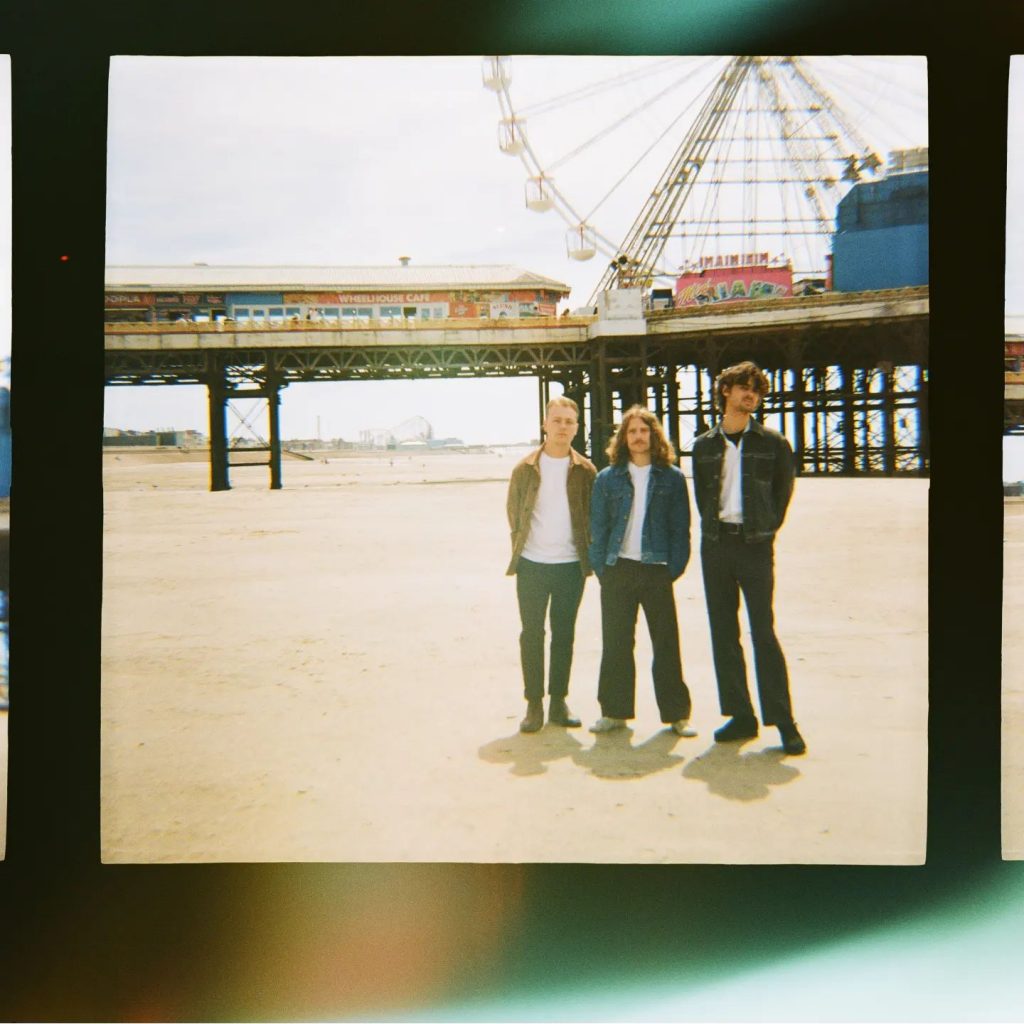 Back in 2019 you played The Bodega on your debut headline tour, what do you remember of the night and are you excited to make a return to Nottingham?

We sure did, before the crazy years of lockdown and all that. It was a great show and a hell of a lot of fun. I went to university in Nottingham and spent many of nights at Bodega, for gigs and recreation so it’s always class to get to play there and be back in Nottingham to visit the old haunts. I believe after that first show we had a very memorable and hilarious night out too, so looking forward to more of the same.

This month you released your EP ‘I’m Insane and Everybody Else Is Too’, tell us about the title and how the writing process was for this compared to your other releases.

The title of the EP is actually a quote I heard from Ozzy Osbourne in an interview he did and I always really enjoyed the sentiment behind it. It also fit with the subject matter within the songs I was writing about at the time. Personally, I was going through a dark bout of depression and I definitely felt like my head was all over the place. But also I know that so many other people probably feel very similar so it’s kind of a play on that, that we can all be going through these difficult times but we should feel comfortable to talk about it and come together. I know mental health and depression can seem taboo at times for people (even myself) so it was a bit of a quip to maybe celebrate and embrace our quirks and darker sides to ourselves. Another added layer is that the world in which we live in at the moment seems crazy (insane) at the moment, so I suppose there is a little element of social commentary in there too. We are all fumbling around in this mad world trying to find a foothold. So yeah, quite an in depth explanation of the title but there ya go….

The writing process for the EP was very similar to the previous stuff to be fair, mainly me and George sitting in our rehearsal room and just jamming through ideas until something sticks haha. We were conscious that we wanted to add a few more new elements and dimensions to the tracks, and wanted these tracks to feel a little more processed and electronic in parts, so I suppose that was a little different making sure we incorporated certain things.

Speaking of the new EP, you played a hometown release show at The Deaf Institute in Manchester. What was the reaction like to the new tunes and are you looking forward to showcasing them on tour?

It was amazing, we always love a Manchester show and was a lovely way to end the gigging year. The reaction to the new tracks was great from the stage, as well as a lot of lovely feedback at the merch desk. So getting on the road next year and getting to play them to even more people around the UK will be class! I mean we have already started working on the set for next year, it’s gonna be sweet, so hopefully no one misses it…

Manchester is bursting with new talent at the moment, what was the process like developing as a band in such a creative place?

I think you’re always going to be shaped somewhat by you surroundings and Manchester is a great place to be, and where we are just outside of Manchester we are 10 minutes train from the centre of town and 10 minutes the other way from the Peak District so it’s lovely to have that option of the big city and the lovely countryside. In terms of us developing I think a lot of that comes from exposing ourselves to a lot of new music and just being in the studio creating and experimenting with ideas. With that your always going to find new techniques and ways of approaching things. 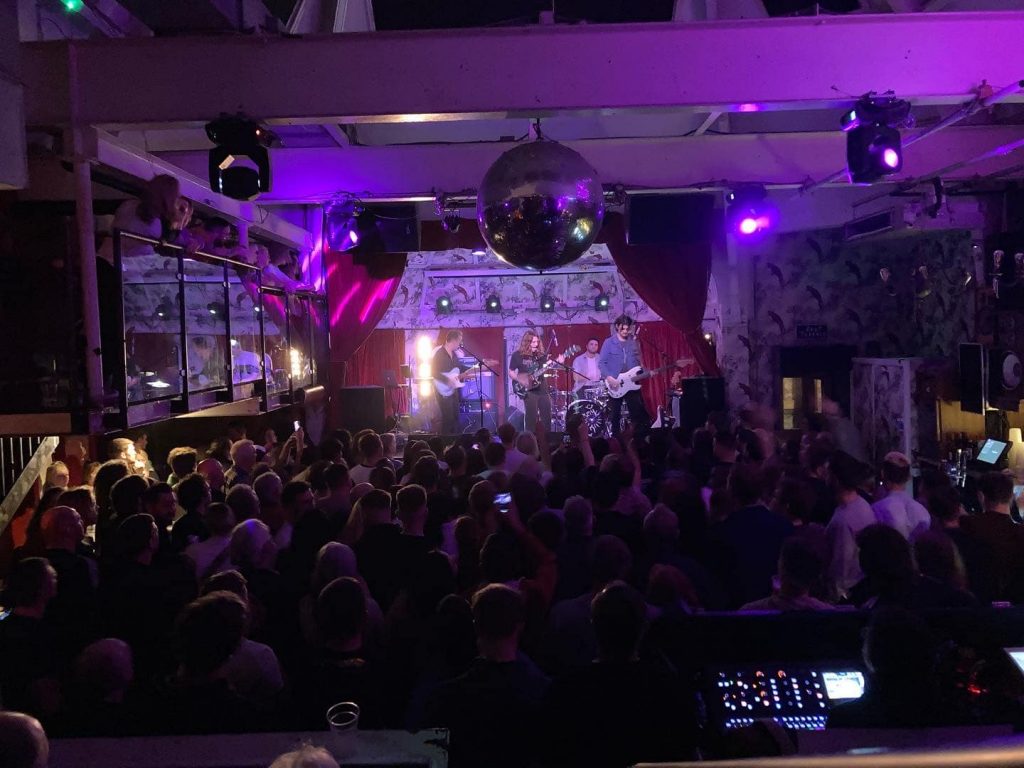 Any new Northern bands we should be playing in the office?

I mean there is so much great stuff out there from all over the world and I could probably sit here for hours telling you to listen to stuff, but let’s just say you should be playing Fuzzy Sun in the office non-stop.

Just before you go, what can we expect to see from Fuzzy Sun in 2023?

Well as you have said, you can expect to see us playing live in Nottingham, London, Bristol, Manchester, and a little exclusive for ya, Glasgow and Stockton too (and possibly more). Alongside of course, brand new music, hopefully a shit load of festivals, maybe even on tele, who knows… we just want to be out and about and creating music as much as possible as thats what we love to do! Big love for the questions and we shall see you in March.

Fuzzy Sun play The Bodega on 8th March 2023. Tickets are on sale here.