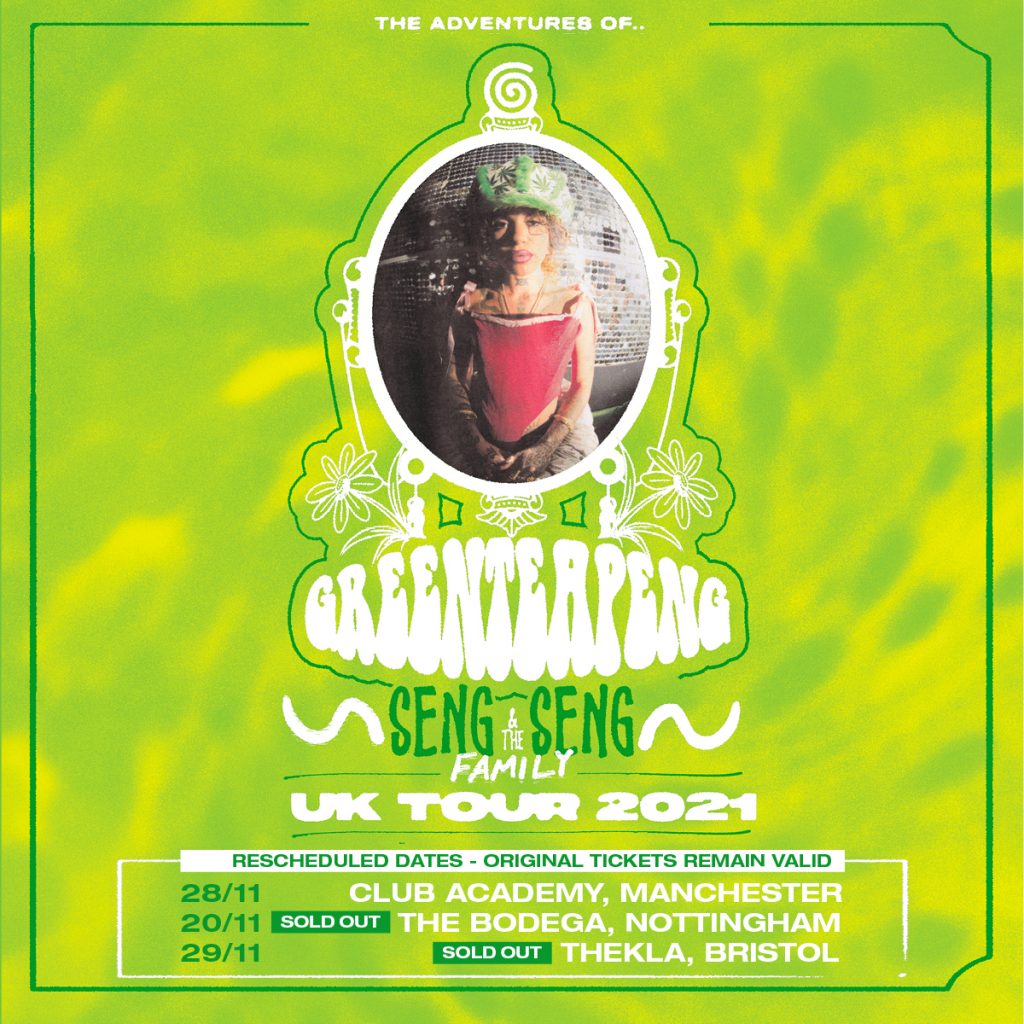 Londoner Greentea Peng sings in her sage-infused vocal on her viral hit “Downers”. Downbeat and drizzled in honey, it’s a lo-fi R&B track about losing yourself in depressants – but those words also depict the world that Greentea has built for herself. Her futuristic soul songs are introspective and self-explanatory, offering soul-soothing mantras for the introverted.

Greentea Peng is the alter ego of Aria Wells, the 25-year-old R&B singer from South London, via Hastings. Her deep, unbothered vocal and smoked-out beats create a fusion that’s unlike anything else in British R&B right now, channelling the angelic sonics and storytelling power of her major influences Lauryn Hill, Erykah Badu, and Jill Scott, with a distinctive, don’t-fuck-with-me edge. Before she set the internet alight with the standalone single Downers in a quietly assured Colors set in June 2019 and her second EP, RISING, she first turned heads with the Sensi EP the year before.

Aria can scarcely remember a time before singing. At the age of five, she loved to belt out The Fugees’ Killing Me Softly. Growing up as a punk fan in a house with a theatrical dad (he played the Artful Dodger in Oliver! as a child), she remembers always being surrounded by music, and beginning to write her own songs as a 12-year-old. “I loved being on stage – any kind of community events, I was always in the church choir,” she remembers of her early childhood in London.

After a period where she withdrew from the music, and began “partying instead… It was a period of life where I just kind of wanted to sink into the background. I didn’t really want to stand out. I just wanted to smoke weed and be miserable – because I was feeling miserable,” Aria moved back to London and started working different jobs, eventually settling behind the bar at the now infamous Visions in Dalston.

“It was a fucking cool time,” she remembers warmly. “The whole area was proper taking off, before it was as trendy as it is [now]. There was something quite romantic about it.” During this time, she saved as much money as she could for travelling, and took herself on long trips to California and Peru. This is when she started her Greentea Peng Tumblr page, with dreams of becoming a travel journalist, documenting her trips with words and photography. (She took the name from a tea named Green Tea Seng, which she encountered on her trip to Peru.)

Her longest trip of all came when she decided to move to Mexico. It was there that she rediscovered her love of music. “I got drunk and did an open mic night”. Remembering how much she loved performing, she joined a band, ‘Los Hedonistas’ “It was just a real nice space away from London. I did a lot of my growing in Mexico, spiritually and musically – like, getting used to playing with musicians, getting used to singing in front of a crowd, being on stage again.”

Between trips to Mexico to play with her band during high season, Aria returned to London;  and wrote the songs that would become her 2018 EP Sensi. Early on, she met Earbuds – the east London producer (producers at the time formally with Samuel Castillo and Josh KIKO) best known for his work with Slowthai – through a mutual friend. Together they wrote Moonchild, Greentea Peng’s tripped-out, addictive debut single. The song signalled the beginning of not only a musical journey for Aria, but a very personal one

“Me and my bredrins/ We’re busy manifesting”.

Rediscovering music was part of her healing process. “I was a very repressed person,” she says. “I was very angry and anxious, a bit arrogant – it was all a product of not expressing myself for so many years.” She points to the tattoos that adorn her long limbs, noting that she’d often get them impulsively when she felt angry or upset, like the face tattoos she got in Mexico after a difficult break-up. She loves the aesthetic of the tattoos, but the act of getting them was also a kind of physical, painful release. “The music helps a lot,” she says, exuding meditative calmness as she drinks camomile tea. “In Mexico, when I started [singing again], my whole personality changed. It’s all been helpful to my personal development, in terms of ego and self-love and acceptance and shit like that.”

Initially, Aria wanted to name her second EP Offerings. “But my mood changed,” she says now. “I was like, ‘No, it’s not time for offerings. It’s time for rising.’ It’s almost like I’m rising up into myself; I’m starting to grow into myself a bit.”

Written in early 2019 in her home studio set-up, RISING reflects a newly settled period in Aria’s life. While Sensi dealt with a tumultuous break-up, RISING snakes between different musings and reflections from the perspective of someone with both feet on the ground. “It’s like, going up an octave,” says Aria. “It’s a bit lighter, a bit more funky with a lot of love. And I’m a lot more comfortable.”

Since the EP, Greentea’s star has only continued to rise. She dropped Ghost Town, a dubby meditation on gentrification in London, back in March. “Living in London, and seeing the change right in front of your face – how can you not write a song about that?” says Aria. Ever since releasing Downers, she says she’s become more empowered to speak her true mind in her lyrics, and Ghost Town was her most explicit offering yet, with its spiky chorus: “You can’t take my city from me.” Aria gets fired up as she discusses the heart of the song: “The poor people, the majority of people in London are being pushed even further below the line – not even just in London, in the world. The people aren’t the priority; business is, profit is.”

Having featured on the Mike Skinner single I Wish You Loved You as Much as You Loved Him – an opportunity she was hugely excited for, as a lifelong fan of The Streets – Aria was meant to have a jam-packed summer 2020, touring festivals around the world. Instead, like the rest of us, she’s been at home. But she’s characteristically thankful for the downtime, and has made the most of lockdown by working hard on her debut album in her home studio. “Creatively, I kind of needed it,” she says. The pandemic has “made concrete a lot of feelings that I already had about the world we live in – the systems of control in place, politics, and our false leaders.” The result, she says, is “some of the best music I’ve made”.

The first taste of her next era arrives with Hu Man: a breezy guitar-led track with a salsa rhythm and rich, ethereal vocals. It might sound chilled out and hazy, but as with most Greentea songs, it cuts a lot deeper than you initially realise. “Hu Man is an exploration of our attachment to identity, or ego in the modern world,” Aria explains. “For me, the goal should be unity. Less of the division and more coming together. Right now, we’re seeing a rise of the individual, we’re all obsessed with it.” She jokes that with an ego as big as hers, she’s been guilty of it too – but her new work finds her trying to push past the self, and think more about the collective. “Human is war cry, saying: Free me from this worrying, this ambition, this self. Just remember that we’re all one, and it’s all love.”

A word that is frequently used to describe Greentea Peng’s music is “spiritual”; a tag that can feel too vague, and that she thinks shouldn’t be thrown around easily. To her, the music is spiritual – not because it has an incense-burning, mellow aesthetic, but because it comes from a deep, resonant emotional place. “Spirituality is a personal thing,” she says. “We’re all on journeys.” Her songs are an essential part of her journey: they pulled her back when she was lost, and gave her an outlet that changed her for the better. That’s what this music means to her. “I don’t have a strict spiritual practice; I’m just on my own journey of finding love. To me, music is meditation.”

Things are getting spooky down on Pelham Street an

Right then, put your feet up as ‘Appy Hour is ba

Two jam-packed shows to kick-off our week from @th

Your pint suppliers are back with tasty deals on p

Now THAT’S how you do it! Big rowdy sold-out Fri