Whilst everyone is stuck indoors doing sweet sod all, we thought it’d be a good time to hound some artists and have a chat with them. This week, we’re catching up with Brighton rock and roll quartet The Big Push. They’ll be swinging by The Bodega later in 2021 and there’s only around 30 tickets left as we write this so if you like what you hear, grab a ticket here. Get to know the band below…

Greetings TBP! Please could you start by introducing the band to us…

Hello Bodega! I suppose we consider ourselves a four-piece British rock and roll band, though we sort of sound like the start of a bad joke, the four of us being an Englishman, Frenchman, Irishman and Welshman… We all met busking on the streets of Brighton. To begin with, we were just messing around and improvising everything, but people kept asking us what our name was, so we decided to form a band. Alongside Glenn on drums, Ren, Romain and Gorran all write songs, sing and swap roles on stage and its cool to see how all four of our quite different musical backgrounds combine. We grew as a band playing mostly on the street and built our reputation both there and on YouTube.

You released your ace latest single ‘Sweet Little Lady’ in October, how has the reaction been since its release?

Thanks! The reaction has been phenomenal, especially considering that we have done everything ourselves and not had huge amounts of money put into PR but grown our following more organically. The song is picking up a lot of streams on Spotify and the video has had a lot of hits on YouTube as well! We also released the song on vinyl and the copies sold out in a weekend or something. People always send us videos of themselves listening or dancing to the song which is amazing!

Talk us through your songwriting process then, is it typically very collaborative between the 4 of you?

Pretty much, yes. I guess there are a few different ways a song can happen for The Big Push. A lot of our new stuff has come from scratch in the rehearsal room, just running with an idea with each of us having a fairly equal input. Sometimes somebody will come with an idea or half a song and the rest will help to finish it. Otherwise, one of us might just write the whole thing and have an idea of how to flesh it out, or we’ll help them realise the arrangement.

You’ve built up this great reputation as a live band, but how have you used the last few months without that opportunity? Plenty of writing and recording hopefully!

Exactly that! During the first lockdown we wrote between twenty and thirty new songs and began rehearsing them every day for a couple of months. Recently we’ve been busy recording some of this new material!

Thirty songs?! We’ll expect a 3 hour set then… The initial tour dates sold out so quick that you had to add more, how excited are you to finally get out on the road later in the year?

We’re mad for it. We can’t wait. I don’t know what to say, it’s been such a weird year for socialising and events etc. It’s strange to comprehend going back to playing sold out shows, but we’re definitely more than ready and we’re going to have an amazing time one way or another. It’s going to be really special, we’ve had practically a whole year to prepare. I’m sure Romain has already decided on all of his outfits (yes, plural) for every show of the tour.

Not sure our dressing rooms is big enough for a whole wardrobe but we’ll make it work. Is there anything a bit random and mundane that each of you are looking forward to on tour? We’ve had bands do crawls of the Wetherspoon’s in each city, try shit local delicacies, rank Travelodge’s around the country, etc…

It will be interesting to see which member of our management team will crack first. Last time on our way up to London for a show (just a two hour drive) we were blasting White Flag by Dido on repeat (have you heard that song?) with a bit of Limp Bizkit thrown in for good measure. 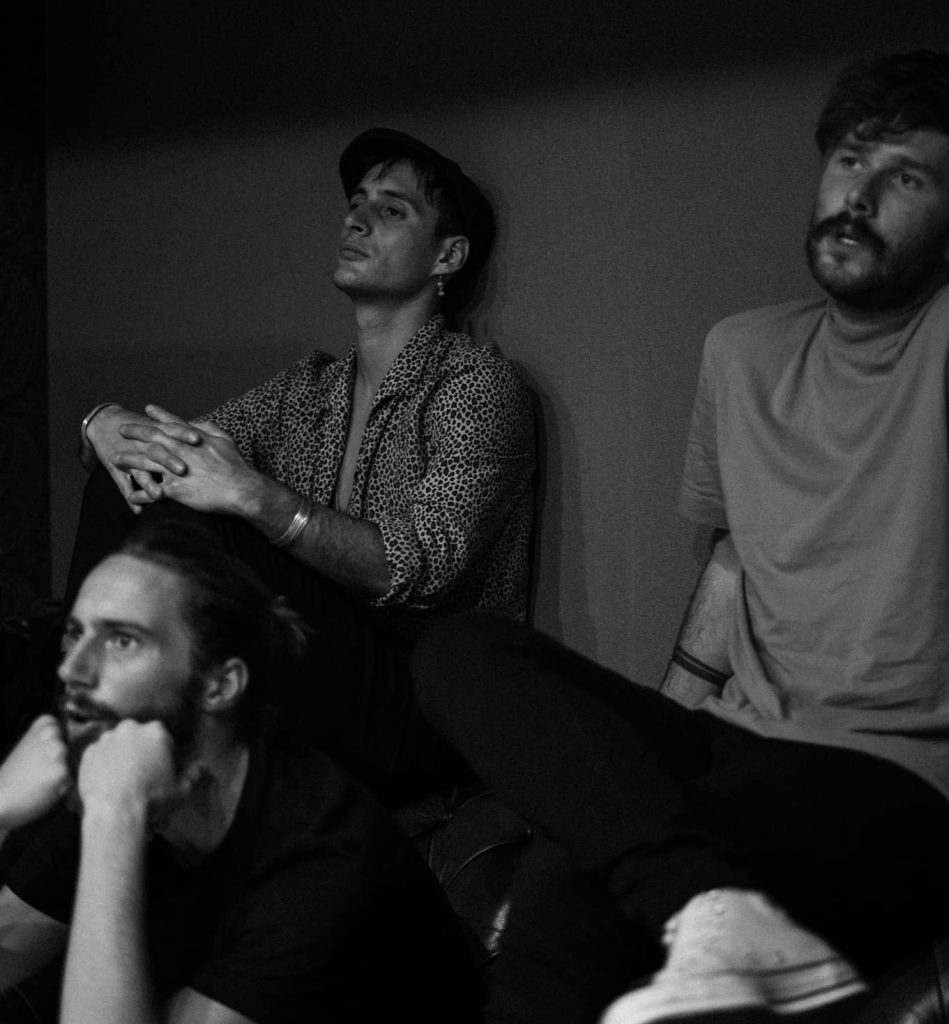 The pre-show AUX is all yours! Any crazy rider requests we should be prepping the venue for (the more outrageous the better)?

Lots of snacks, but no gluten, dairy, sugar or nuts please. A constant temperature of about 18 degrees must be maintained constantly in the backstage area, but not through the use of air-con, because that will damage our voices. A police escort to the venue would be handy. 12 coffees. A football. I don’t want to meet anyone called Dan. If there is someone called Dan working as crew, could we suggest a name change to Daniel? Most upholstery or curtains, rugs etc could be kept to a stark shade of burgundy. When you leave fresh flowers in our dressing rooms, under no circumstances should there be any chrysanthemums, tulips or daffodils. Lots of ice. A mannequin each would be kind of cool, because then we could keep our outfits on them whilst we’re naked. You could hang a photo of Dennis Wojtkiewicz on the wall where we can see it as we walk in and out of the backstage area. A bottle of Kettel One Vodka and rag for cleaning purposes. We’ve never really been too fond of the whole backstage pass thing, wristbands and stuff pointing out who is who, therefore it’s important that the staff familiarise themselves with all our faces before we arrive, this is going to avoid confusion later. Really soft toilet paper and lots of puppies.

Consider it done. Finally, we need some new music suggestions to keep us occupied! What do you recommend we should be getting in our ear holes?

You should check out German band AnnenMayKantereit, we’re big fans of theirs and they do some pretty cool live videos too!

The Big Push will be at The Bodega on 14th July 2021, and the final few tickets are on sale now. Swing by again next week for another chat with an upcoming artist!

RT @bodeganotts With their ace new album 'This Time Next Year' out now, we're looking forward to @KidKapichi tearing it up at @bodeganotts on the rearranged date of 7th November 2021. All tickets remain valid, with some still available here: https://t.co/HjOD8yfF3X https://t.co/p0LmiV2zQM