Little over 12 months since forming, Edinburgh’s swim school are quickly proving that they’re a band to keep an eye on. Following a full UK tour at the end of last year supporting The Xcerts, the indie-pop quartet are already making waves in Scotland, tipped on many ‘ones-to-watch’ lists for 2020. They were scheduled to join us in June to headline the first edition of Tempo, our new music showcase, marking the band’s first headline show outside of Scotland. With a new date coming soon, we had a chat to Alice from the band below!

Hey swim school! Could you start by introducing yourselves for us please?

Hey Bodega, it’s Alice here. I am the lead singer and guitarist of swim school. Lewis Bunting plays lead guitar, Matt Mitchell is on bass and then we have Nairn Milne on drums.

You’ve created a really infectious indie-pop sound, how did you start getting together and making music?

Myself and Lewis met when we both studied music at college, we were in a few cover bands together as part of our course but we always wanted to start our own band and write our songs. Lewis used to be in a band with Matt and they both knew Nairn through a friend so we were all mutual friends who loved music.

When we started swim school, we didn’t know what our sound was going to be, we just started to write a lot of songs. The more we wrote, the more our sound developed and the outcome was our debut single ‘sway’. It is clear to see that our sound is still developing as each song that we release is different, which is something that we want to achieve. Our main influences are bands such as JAWS, Wolf Alice, Pale Waves and Palace which is the reason you could say we have that infectious indie-pop sound. 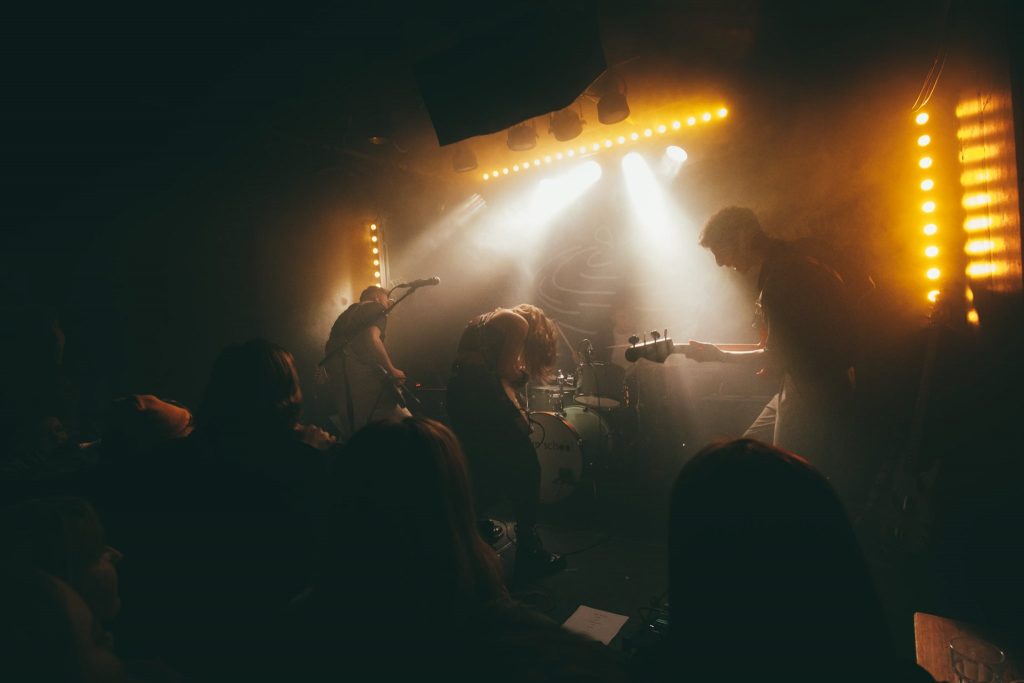 The future Nottingham show will be your first English headline but recently you sold out your first Scottish headline gig, how was that for you guys?

Our debut headline show took place at Sneaky Pete’s in Edinburgh back in February and it was by far one of the best shows we have ever played. The atmosphere of the whole night was just incredible, despite it being the most nervous we have ever felt, and the crowd were beyond amazing too. As it was our first-time headlining, it was a whole new experience. It was crazy to think that we had managed to sell out a venue and fill it with people who were singing back our lyrics and dancing along to the songs – the energy that night blew us all away!

As soon as we came off stage that night, we all said how we can’t wait to do it all again, so we are so excited for our Nottingham headliner! Last time we played in Nottingham we had so much fun, so we are beyond excited to play our first English headliner there.

At the end of last year, you went out on tour across the UK with The Xcerts, what was that experience like as a new band?

When we got offered the tour with The Xcerts, we were honestly in shock. We hadn’t even been a band for a year yet and we got given the opportunity to go on a two-week UK tour with one of our favourite bands. We played our first English shows on that tour which was a different but fun experience and we learnt so much – we definitely became better musicians because of how many shows we were playing.

The craziest part about the tour was the fact we are all massive fans of The Xcerts, every night we got to see them perform our favourite songs. For a few of the dates we got to share the stage with the boys. Murray would come up to sing our last song, “too young to know” and I got to go up on stage with them and sing “Feels Like Falling In Love” – it was so much fun. We became really close the boys over the two weeks away with them sharing their advice on how to survive tour life – the whole tour was an incredible experience that we are all so grateful for and we will never forget. 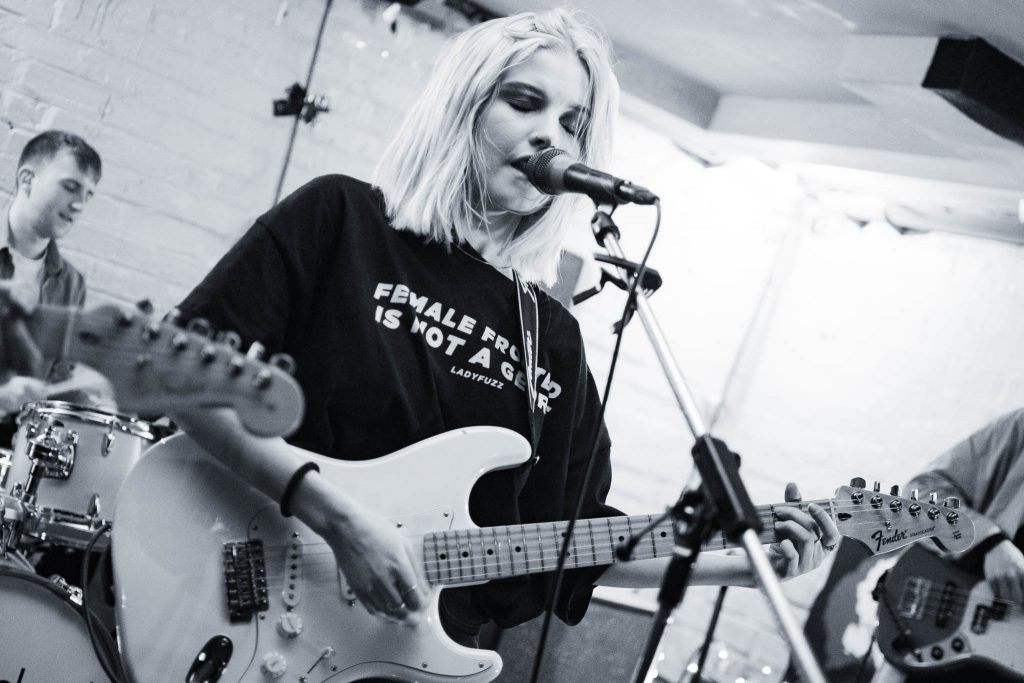 We’re without gigs for a while now, how are you keeping yourselves busy?

Like a lot of other bands, everything that we had planned has been postponed which is devastating as we had a lot of exciting gigs lined up, however, we are going to make the most of this free time. We are going to be writing loads of new tunes, recording home demos and just plan for the future. We are all missing gigging so much so we can’t wait to get back to it when everything is back to normal.

And finally, what is each member’s go-to album now that we’ve all got some time off?

Alice –
It is hard to choose one album as we have a lot of time off but one album I will be spending a lot of time listening to is Loyle Carner’s “Not Waving, But Drowning” – it is such an incredible album and has a calming nature about it which is perfect for the current situation that we are all in.

“I Forget Where We Were” by Ben Howard would be my choice. This is album has been a staple for me since I first heard it nearly 5 years ago. The guitar techniques and effects Ben uses in this album continue to amaze me even to this day, as well as song structure and lyrical content. I feel like although the album is seen a a rather dark album I do find there is a lot of positivity within some of the songs on this album, which is important considering what’s going on just now. This album although very different to what we do in swim school has it all for me.

My album choice would be “The Ceiling” by JAWS. I go back to this album every so often and found myself listening to it again the other day. It’s such an easy going album to listen to and coincidentally there’s a few track titles on it that are very relevant at the moment.

“Gravitational Pull vs. The Desire for an Aquatic Life” by Stars Of The Lid would be my choice. An all-time favourite, this album is perfect for going on long walks, meditation, and general thinking, which I’ll definitely have a lot more time to do at the minute. Fits the surreal reality we’re all living in at the moment.

You can re-watch Alice’s Bodega Live session from the beginning of lockdown – watch here. 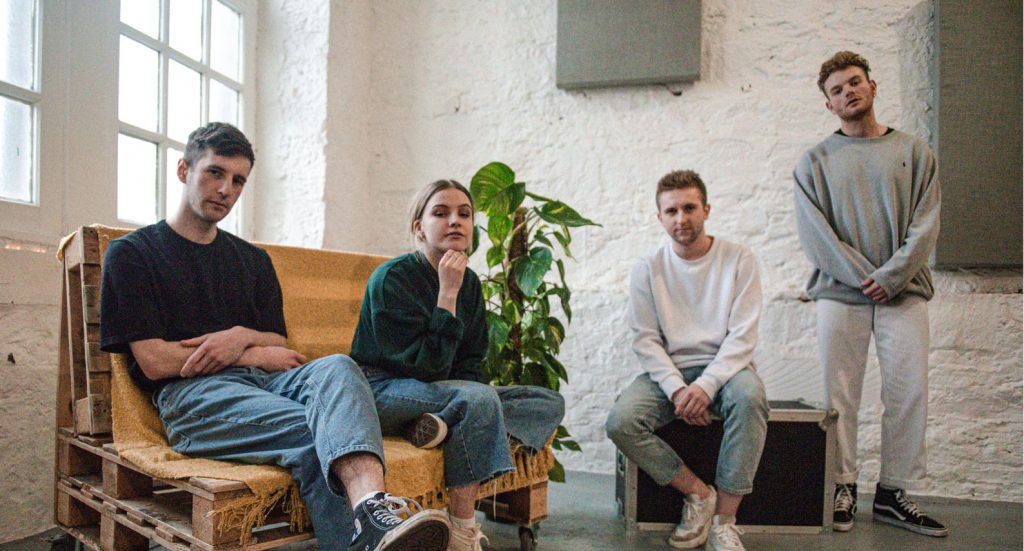 Here's hoping that next January will look a little

One like and we’ll add this to our jukebox https://t.co/bSoLJaKOyH

We’re down to the last few tickets for infectious pop-rockers @thebigpushband in July 🔥 Rest of the tour has sold out so don’t hang around - https://t.co/e6oq2ZZziI https://t.co/aF8kUWXYoj